Productsyoucantrefuse.com is reader-supported. When you buy via links on our site, we may earn an affiliate commission at no cost to you.

Ever since Apple announced the iPhone 4S having “A5″ processor, everyone has been pointing to the below image from a test run by Anandtech and saying that the iPhone 4S will be twice as strong as the Samsung Galaxy S2. I beg to differ. 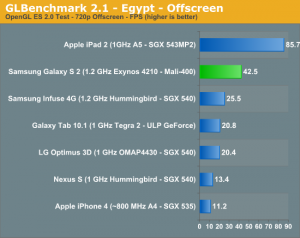 While the above test doesn’t have any discrepancy, one major thing is that the SGX 543MP2 results are from an iPad 2 (a tablet) while the Mali 400 results are from a smartphone. Thus, we can’t readily take this to directly and accurately predict the comparison results for iPhone 4S because there are other things to consider:

1. Mali-400 lags behing SGX543MP2 in “offscreen” tests which are done for resolutions greater than native SGS2 resolution (SGS 2 resolution is 800×480 while test is done at 720p) and brute triangle pushing. Samsung didn’t have to optimize their GPU implementation for this because SGS2 was never going to run a game at 720p resolution and would also need to push lesser triangles for similar detail. Hence they could easily make this trade-off to get lesser power consumption and heat generation

2. Mali-400 goes hand in hand with SGX543MP2 in all other tests as seen on glbenchmark.com

3. It is naive to think that the same SGX543MP2 implementation as iPad 2 will be present in iPhone 4S. Even if iPhone 4S is slated to have “A5″, a lot depends on the actual clock speeds (CPU and GPU), graphics memory, etc. Apple will do similar trade offs like Samsung (and Apple has already done this with A4 in iPad 1 vs iPhone 4) and the real results would be available only then.

So,  the end result is that we will have the real comparison only when iPhone 4S is out.

PS: Not that the results matter anyways

since firstly, the comparisons should now be moving to upcoming Nexus Prime and not SGS2 and secondly, the raw power of these GPUs won’t determine much since they cater to two completely different OSs and would have a lot of software and ecosystem dependencies on the user-perceived outcome.