Productsyoucantrefuse.com is reader-supported. When you buy via links on our site, we may earn an affiliate commission at no cost to you.

Introduction to the Indian Coffees

Indian coffee is the most extraordinary of beverages, offering intriguing subtlety and stimulating intensity. India is the only country that grows all of its coffee under shade. Typically mild and not too acidic, these coffees possess an exotic full-bodied taste and a fine aroma.

Indian coffee has a unique historic flavour too! It all began with a long, arduous journey around four hundred years ago… when the legendary saint Bababudan brought seven magical beans from distant Yemen and planted them in the Chandragiri hills of Karnataka. The sensations of aroma, flavour, body and acidity that you enjoy with each coffee experience is rooted in these mystical beginnings.

It is often said, the Indian coffee grower pours his life into the crop. Is it any wonder then that India has consistently produced and exported a remarkable variety of high-quality coffees for over one hundred and fifty years!

India cultivates all of its coffee under a well-defined two-tier mixed shade canopy, comprising evergreen leguminous trees. Nearly 50 different types of shade trees are found in coffee plantations. Shade trees prevent soil erosion on a sloping terrain; they enrich the soil by recycling nutrients from deeper layers, protect the coffee plant from seasonal fluctuations in temperature, and play host to diverse flora and fauna.

Coffee plantations in India are essential spice worlds too: a wide variety of spices and fruit crops like pepper, cardamom, vanilla, orange and banana grow alongside coffee plants.

India’s coffee growing regions have diverse climatic conditions, which are well suited for cultivation of different varieties of coffee. Some regions with high elevations are ideally suited for growing Arabicas of mild quality while those with warm humid conditions are best suited for Robustas.

Kents: Kents is the earliest variety of Arabica, selected by an English planter of the same name during the 1920s. This variety remained popular with the planting community till the 1940s, because it was less susceptible to rust. Today, it is grown in a few areas but it is still known for its exceptional cup quality.

S.795: This is by far the most popular Arabica selection released during the 1940s with high yields, bold beans, superior quality and relative tolerance to leaf rust. This selection was developed using ‘Kents’ Arabica, known for its high quality. Even today, the S.795 is a favourite with the planters and is a widely cultivated Arabica variety. S.795 has a balanced cup with subtle flavour notes of Mocca.

Cauvery: Popularly known as Catimor, Cauvery is a descendant of a cross between ‘Caturra’ and ‘Hybrido-de-Timor’. Caturra is a natural mutant of the famous Bourbon variety. Thus, Cauvery inherited the high yielding and superior quality attributes of Caturra and the resistance of ‘Hybrido-de-Timor’.

Sln.9: Selection 9 is a derivative of a cross between an Ethiopian Arabica collection, ‘Tafarikela’, and ‘Hybrido-de-Timor’. Sln.9 has inherited all the superior cup quality traits of Tafarikela. This variety has won the Fine Cup Award for best Arabica at the ‘Flavour of India – Cupping Competition 2002’ organised by Coffee Board of India. 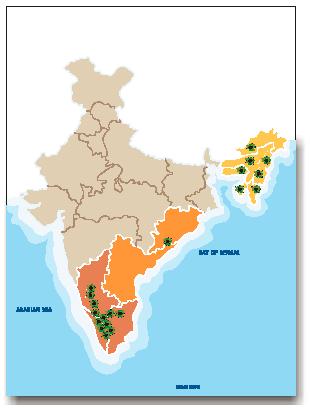 Regional Logos with the specifications in terms of Altitude, Rainfall etc.

Araku valley (Andhra Pradesh): Home to colourful parrots, it is not unusual to see a flock of chattering red and green birds, darting through trees in this scenic valley.

Bababudangiris (Karnataka):Bababudan brought seven ‘magical’ beans from Yemen and planted them in the lofty hills of this region. Deer is often spotted here, grazing alongside plantations abundant with full-bodied Arabicas.

Biligiris (Karnatka/Tamil Nadu): Besides full-bodied Arabicas, this region is noted for the sambar – the largest Indian deer with huge antlers.

Brahmaputra:The mighty Brahmaputra which flows through the North Eastern statesis the lifeline of this region which is home to the one-horned rhinoceros. This sturdy animal is found in large numbers at the Kaziranga National Park in eastern Assam.

Chikmagalur (Karnataka): Chikmagalur’s forests and wildlife sanctuaries are abundant with beautiful peacocks, India’s national bird. The peacock loves to show off its colourful feathers, especially during its elaborate courtship dance.

Manjarabad (Karnatka): Gentle sloping terrain with small streams and coffee plants provide a natural habitat for the jungle fowl.This yellow-headed bird with a red comb and multi-coloured plumage is generally seen in pairs, close to the coffee plantations.

Pulneys (Tamil Nadu): A well-known feature of this region is the bright, bluebell-like Kurinji flower that makes a dramatic appearance, once in 12 years. The high-grown Arabicas however, are a predominant sight, year after year.

Sheveroys (Tamil Nadu): The magnificent Gaur or Indian bison is an embodiment of vigour and strength, much like the boldsized Arabicas grown here. This massive animal with its huge head and sturdy limbs grazes on the lower hill tracts of this picturesque region.

Travancore (Kerala): The national flower of India, the lotus symbolises purity and beauty. These bright, fragrant flowers with floating leaves and long stems, grow in shallow waters in this region noted for its Arabicas and Robustas.

Wayanad (Kerala): Wayanad is home to the Indian tiger, India’s national animal – a symbol of valour and courage.

Organic coffee are those coffees produced by such management practices which help to conserve or enhance soil structure, resilience and fertility by applying cultivation practices that use only non-synthetic nutrients and plant protection methods. Further, although many producers grow coffee without use of synthetic agro-chemicals, this passive approach is not sufficient to be considered organic in the absence of credible certification by an accredited certification agency.

Organic coffee is being produced by about 40 countries in the world with major production share coming from Peru, Ethiopia and Mexico. Organic coffee is chiefly consumed in the Europe, US and Japan.According to US Organic Trade Association, the global sales of organic coffee reached 67,000 MT in 2006 recording a 56% increase from 2003 when approx. 42,000MT were exported. In the United States alone the organic coffee sales amounted to approx. $110 million in 2006, an increase of 24% from previous year. Organic coffee products are now marketed in the form of regular, decaffeinated, flavoured and instant coffee as well as in other foods like ice-creams, yoghurt, sodas, candies and chocolate covered beans etc.

There is a good potential for production of organic coffee in India, as the conditions are far more favourable than in any other coffee producing country. Some of the natural advantages in India are;

i) Coffee is mainly cultivated in deep fertile jungle soils under a two tier mixed shade canopy comprising of evergreen leguminous and non-leguminous shade trees. Growing under shade has several advantages. Shade trees provide a natural habitat for vast population of birds and natural enemies of insect pests/diseases, help in reducing the soil erosion, contribute towards the fertility of coffee soils by recycling nutrients from deep soil in the form of leaf litter and finally protect the coffee bushes from vagaries of changing weather conditions.

i) Traditional farming practices such as use of cattle manure, composting, manual weeding etc., are in vogue in vast majority of small holdings.

iii) The horticultural practices followed in Indian coffee plantations are considered as one of the best in the world, in which emphasis is mainly towards manipulation of microclimate and plant health, so as to reduce excessive dependence on agro- chemical inputs.

Apart from these natural advantages, the Indian coffee industry is characterised by predominantly small holdings. Majority of these small holdings especially in Idukki zone of Kerala, Bodinayakanur zone of Tamil Nadu and all the tribal holdings in Andhra Pradesh and the North-Eastern states are basically organic by default. These small and tribal coffee growers do not use chemical fertilizers and plant protection chemicals due to their poor economic status and due to their belief in natural farming. Consequently the yields are low and are only at subsistence levels. Thus, there exists a good scope for converting these small and tribal holdings into certified organic without much change in the existing cultivation practices.

Despite good potential, the organic coffee is grown only in about 2,600ha in the country with an estimated production of about 1700MT as on 2007. The major area is in Tamil Nadu and Kerala followed by Karnataka

The growth of organic coffee sector in India is not very encouraging despite the fact that the conditions here are ideally suitable for organic coffee production. Some of the constraints identified are as follows:

Ø      Many smallholder groups, especially in Kerala, have opted for organic farming during the great coffee price crisis  period 1999-2003 mainly to reduce cost of inputs. But unfortunately, majority of the area was Robusta coffee, which is  not very much preferred in the international market.
Ø      The quality of coffee produced by smallholder groups was often not upto expectation of specialty coffee market.
Ø      The agencies which were behind the formation of smallholder groups also did not possess necessary marketing skills to promote their certified product in the International market.
Ø      During the late 1990’s, organic coffee were fetching a good premium in the international market. But the premiums started narrowing down to about 15% in recent years. Considering the disadvantage Indian coffee faces with regard to the logistics to main organic coffee importer i.e., USA the premiums are not very attractive for Indian organic coffee.
Ø      From 2004 onwards coffee prices remained attractive and prices offered in the regular market are high enough for the producers to sell their produce at farm gate rather than in the export market.

Despite the slow growth, some of the producers of organic coffee especially in the medium and large grower category have been successful in realizing high premiums in the international market for their organic coffee. This is because of their constant efforts in improving quality of coffees as well as marketing. Even incase of smallholder groups, organic farming has offered good benefits through attractive premiums for pepper, vanilla etc., which are grown as intercrops in their coffee holdings.

Coffee Board has developed a package of practices for organic coffee production based on field experiments, surveys and case studies. The Board has also brought out various publications on organic farming from time to time. The important ones are:

Booklets on
1. Permitted inputs to control pests and disease in organic coffee estates
2. Guidelines for production of organic coffee

Extension Folders on
1. Know how about organic coffee certification
2. Composting of coffee wastes

During the 1990s, the Government of India initiated the process of developing a national policy on organic agriculture and putting in place the production standards so to encourage production and export of organic agricultural products from the country. The initiative was spearheaded by the Ministry of Commerce & Industry. The Commodity Boards functioning under the Ministry were actively involved in developing the national policy and standards on organic agriculture. Accordingly, the National Programme on Organic Production (NPOP) was officially launched in 2000 and notified under FTDR Act in the year 2001. The NPOP was accorded equivalency by the European Union for its regulation on Organic Agriculture EC 2092/91. That means that any product certified according to NPOP can have ready access to European markets without the need for separate EU Certification. The USDA has also recognized the accreditation system adopted by India under NPOP, which means that all the Certification Agencies accredited under NPOP can inspect and certify according to USDA National Organic Programme (NOP) with the need for separate accreditation by USDA. At present there are nearly 20 accredited certification agencies in India.

PepsiCo to Roll Out Recycling Kiosks